The history goes back to 2009. This year is the Fengshui ridge of Indian aquaculture, because before this, SPF Penaeus vannamei has not been introduced, Penaeus monodon occupies the absolute dominant position in the aquaculture industry of Indian coastal areas, and the cultivation mode is mainly low-density extensive and semi extensive. Many farms have not even used aerators and feed less feed.At that time, China, Thailand and some other Asian breeding countries had already achieved the popularization of Penaeus vannamei, especially in terms of growth rate and disease resistance (referring to white spot disease), South American white shrimp had incomparable advantages. After the introduction of SPF South American white shrimp into India, the pattern of local aquaculture industry has been rapidly changed. The breeding mode, industrial division and supporting services have been upgraded comprehensively. Indian shrimp processing enterprises have sprung up like mushrooms.According to the statistics of the marine product development agency of India (MPEDA), the process of Penaeus vannamei replacing Penaeus monodon only lasted for several years. Penaeus vannamei is favored by processing enterprises, and there is no threshold for cultivation. Shrimp fry factories endorsed by Indian government agencies (such as coastal aquaculture Bureau) are also actively promoting the industrial transformation.Up to now, almost all of India's major states have withdrawn from the cultivation of monodon, and only part of West Bengal remains. In the 2019-2020 fiscal year, the shrimp production in India dropped to 38000 tons, far lower than that in Vietnam and Bangladesh. 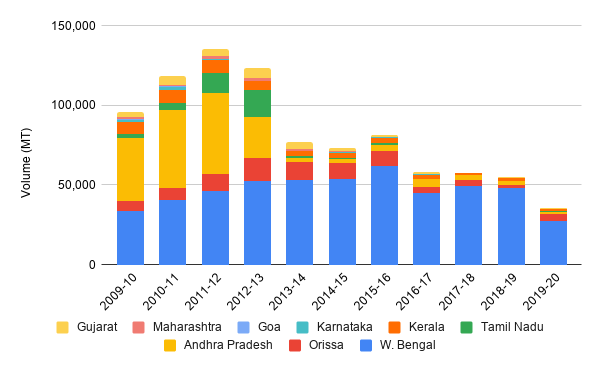 Penaeus monodon production in Indian states, 2009-2020 (source: MPEDA)In Andhra Pradesh, a group of shrimp farmers who raised South American white shrimp in the early stage made a fortune. However, in recent years, the price of South American white shrimp has been depressed, and the Indian industry has been plagued by diseases and natural disasters. The profit of farming has been far less than in previous years. Many farmers have questioned the sustainability of South American white shrimp farming.After years of lobbying by the industry, in 2019, the Indian government agreed to offer two kinds of shrimp suppliers (Moana   Technologies and aqualma opened the green light, and two local Indian shrimp fry factories (Vaishnavi) opened   Aquatech and unibio have signed sales cooperation agreements with the above suppliers respectively.By the end of 2020, the first batch of 2000 will be launched by Moana   SPF Penaeus monodon produced by technologies was successfully delivered to Vaishnavi   Aquatech;In the first quarter of this year, Vaishnavi   Aquatech has sold about 125-135 million SPF shrimp larvae to customers in Andhra Pradesh. 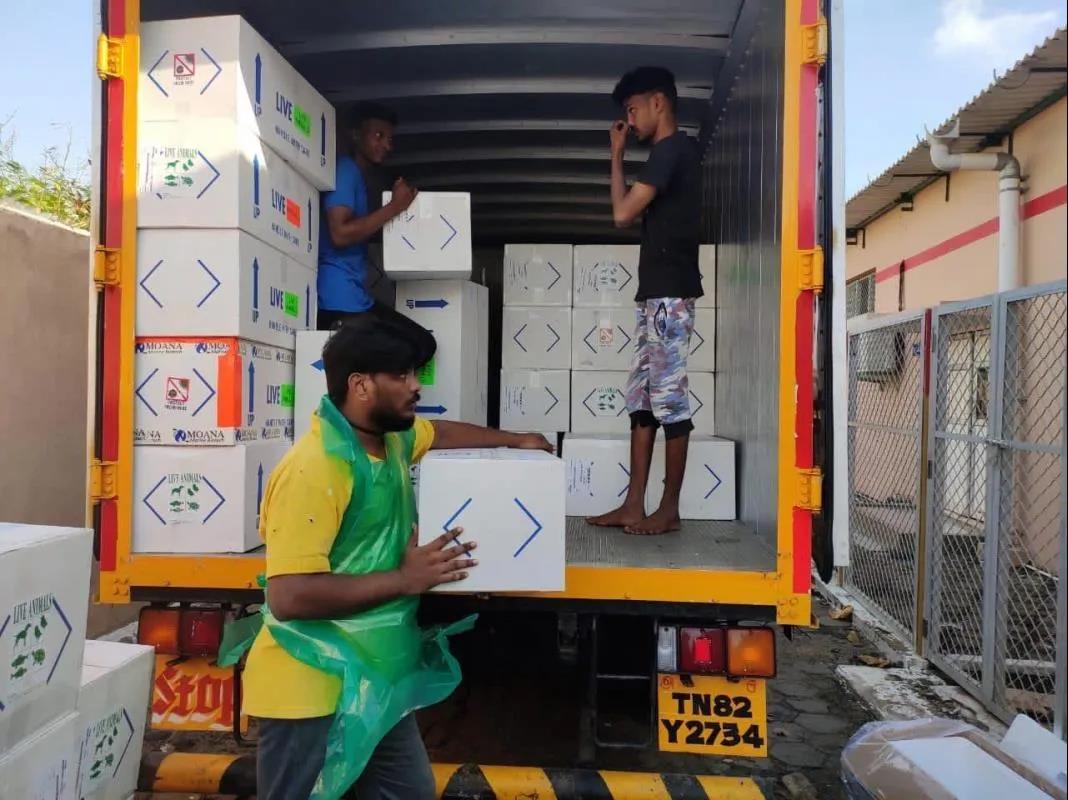 Vaishnavi, 2020   Aquatech receives the first batch of Moana   Technologies Penaeus monodonFor the SPF shrimp industry, the performance of the first crop cultivation is very important. According to Vaishnavi   According to the statistics of Aquatech company, low density and high-density models are used in the farms, and the low-density breeding seedling quantity is 8   The average body weight was 45 g in 87 days, and the feed coefficient (FCR) was 0.73-0.79; The amount of high density seedlings was 15   The average body weight was 30g at 87 days and the FCR was 1.10-1.17.

At present, only Moana is allowed by the Indian government   Technologies and aqualma sell SPF Penaeus monodon. CPF and topgen, another Thai species shrimp supplier, are not licensed. Other suppliers are unlikely to enter the Indian market in the near future. The cake in the early market will be sold by Moana   Technologies shares with aqualma and partners.In June this year, Vaishnavi   The capacity of Aquatech's Andhra Pradesh prawn plant will reach 200 million, and two more hatcheries are planned to be built in 2022;Vaishnavi, 2021   Aquatech's 300 hectare spotted shrimp farm in Gujarat has been put into operation with a production of about 1000 tons.Unibio, another Miao enterprise, has sold 10 million shrimp larvae of Penaeus monodon at this stage. Due to the severe challenge to the logistics system caused by India's new crown epidemic, unibio's output growth has slowed down. 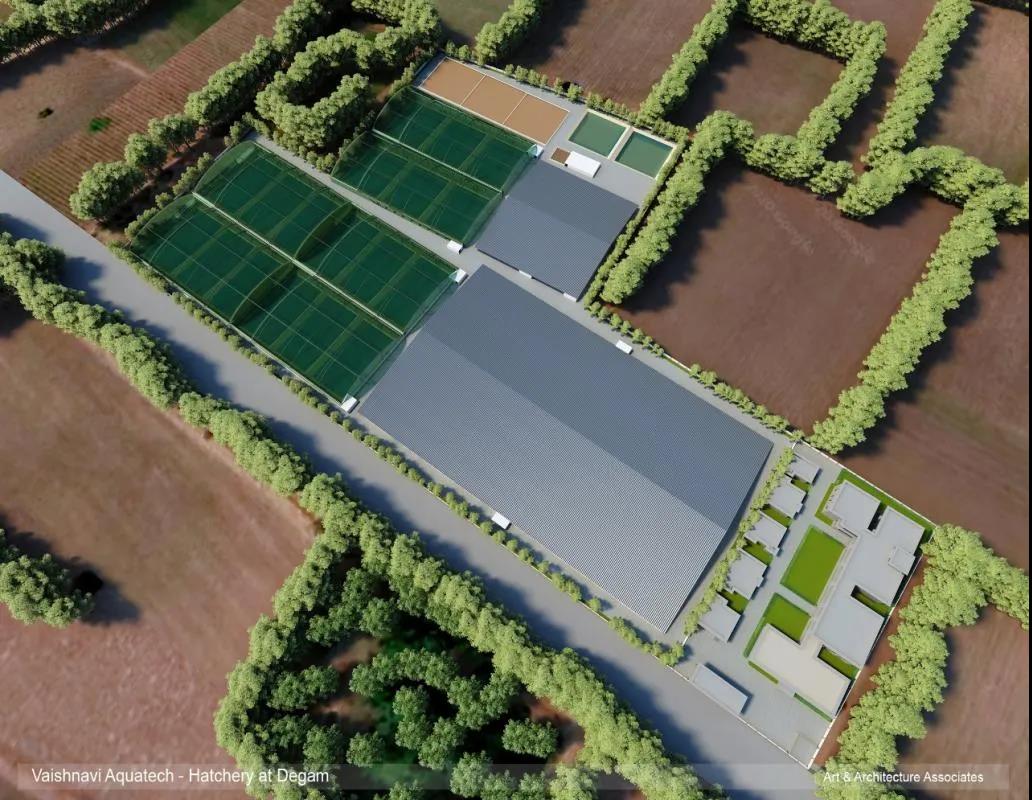 Vaishnavi   Aquatech design of Gujarat incubator, which is now under construction

Niche market trendFrom the market point of view, in recent years, spotted shrimp seems to have a rising trend in the Asia Pacific region, with the production of China, Vietnam, Bangladesh, Indonesia, Malaysia, Sri Lanka and Australia increasing day by day. According to the official statistics of the food and Agriculture Organization of the United Nations, the global output of Penaeus monodon has reached 700000 tons (shrimp) in 2019   Insight believes that only 400000-500000 tons, accounting for 10-15% of the total shrimp production.In Europe, Penaeus monodon has gradually become a niche commodity, and it has appeared in the market as a high-end product in the catering industry. However, importers and consumers are not willing to pay a premium, especially for products of the same size as South American white shrimp. In China, Japan and the Middle East, consumer markets are likely to be much better.Abad, Indian seafood exporter   Anwar, general manager of overseas   Sheraz firmly believes that the future of prawn farming in India is bright, and 2021 is a turning point for the industry. Abad   Overseas is a European aquatic enterprise Nueva   Pescanova's joint venture focuses on the production of high-end HOSO shrimp for the Chinese and European markets.At this stage, abad team is working closely with Andhra Pradesh aquaculture enterprises to help them apply for ASC certification, ensure the traceability of Indian spotted shrimp from farms to containers, and bring the products into the global sales network, and promote them to retail markets in France, the Middle East and Japan.